Transgender Trend, in their excellent post on RSE guidance for schools, include a discussion of the many ways that LGBT groups are mis-representing the Equalities Act to promote their ideological position. This means that, where there is ignorance of the law, pressure can be illegitimately exerted on teachers, governors and parents to “teach” and comply with the viewpoint of LGBT activists.

There is no legal requirement for schools to “teach the Equalities Act”, or for primary schools to teach any LGBT elements. Though schools do have a Public Sector Equality Duty to prevent discrimination in and out of class, primary schools are only obliged to teach about same-sex parents, for example, if there is a same-sex family represented in a particular class. The duty only applies to that class and not to any other class in that year, let alone the rest of the school.

The Equalities Act 2010 has nine characteristics that are to be protected from discrimination. These are:

Contrast these legal requirements with the “teaching” in school materials from groups like Stonewall, Educate and Celebrate and No Outsiders.

Stonewall’s resources are promoted by the Department for Education. Examples of Stonewall’s distortion of the law are in their following statements (note: gender identity is not a protected characteristic):

“THE EQUALITY ACT 2010 requires schools to eliminate discrimination on the grounds of sexual orientation and gender identity.”

“Your policy should define bullying and outline the grounds on which it can take place, including on the grounds of the protected characteristics (sexual orientation, gender identity) under the Equality Act 2010”

“Homosexual: this might be considered a more medical term used to describe someone who has an emotional romantic and/or sexual attraction towards someone of the same gender.”

And what are the implications of using these substituted terms? In one discussion purportedly about challenging gender stereotypes, for example, Stonewall move straight on to ‘gender identity’, suggesting that changing gender identity is the only way to reject those stereotypes:

“In class, ask children and young people to discuss stereotypes of boys or girls and talk about how there is no such thing as a ‘typical girl’ or ‘typical boy’. 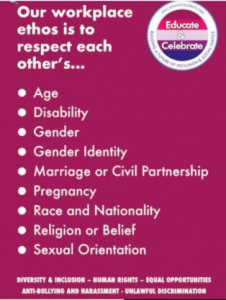 The new No Outsiders poster includes ‘Gender Reassignment’ but still replaces ‘Sex’ with ‘Gender’ in its list of protected characteristics.

This re-writing of the Equalities Act suggests a political bias in these materials. The Transgender Trend post has many more examples of problematic content in these and other RSE programmes. Policymakers, primary school teachers, governors and parents alike should call out and reject any materials with these manipulative, dishonest classifications, focussing instead on the Public Sector Equality Duty.

Our children are precious and deserve better than to have this ideology forced on them in school. It also happens to be against the law.